I recently realized that I have a misguided idea that it's only appropriate for me to blog when I have something big and/or important to say. Well, that's just silly. And since it's pretty much just me and my hubby reading this blog anyways, who's to say I shouldn't post about mundane stuff like what we had for dinner last night.

Just kidding, that might be a little too boring after all...

But...if it were really delicious and I posted the recipe maybe it could be interesting...hmm...

Anyways, I digress. The point is, I'm going to be posting about anything I feel like from now on, not just things that seem "worthy"! So if anyone is actually reading this, look forward to more posts (probably, if I get time to write them) from here on out!

On to the update!

So, things have been pretty crazy lately...thankfully in a good way! The summer and beginning of fall have been largely dedicated to game development around here - both fun "indie" development and less fun but more profitable freelance projects. The Rhythos RPG Builder kickstarter didn't succeed back in May, but David still has plans to move forward with the project and try again at some point. However at the moment he's focusing more on Deity Quest. And I'm doing the writing for it (but not the art)! 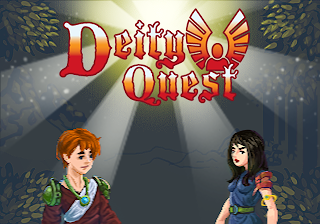 Deity Quest is an awesome new game that David designed over the summer.The game is an RPG, with elements from dungeon crawlers and roguelike games. You play as a young new god named Tyrus, who recently graduated (#2 in class) from the Ethereal Academy after 100 years of study...and you have to convert/recruit followers, use them to fight enemies, and compete with your rival, Ryga (who graduated #1 in class). It has some similarities to Pokemon since there are over a hundred different follower types, and you can "convert" enemies to become your followers, level them up, give them new equipment, etc. etc. The game is super fun and addicting, even for us developers, which is a good sign! Also, we are working with some really talented guys on this project: Chase Bethea is doing the music and sound, and Santiago Ocampo has been creating the original artwork.

The writing for Deity Quest has been very enjoyable so far. I'm working from an outline written by David, so I basically get to jump right into my favorite part of writing: details! The game is in eight parts/chapters, and I've finished the first part, and hope to get to at least part 4 within the next few weeks.

While I have been doing some writing for Deity Quest, most of my time lately has gone into "real" work, and Havencall! Havencall has been progressing a little slowly, but definitely moving along at this point. We recently decided to move the release date to March 2014, to give us enough time to make it great. Here's an IndieDB article from a couple days ago with a bunch of new art, info, and updates: http://www.indiedb.com/games/havencall/news/update-and-changes . The article features this new background that I finished recently:

I'm becoming increasingly aware of a problem with the length of Havencall's development - the longer I work on this game, the better at art I become, and the worse the earlier scenes start to look in comparison. By the time I finish the game I feel like I'll have become so much better that I'll want to go back and re-do all the earlier stuff...

But I guess if I keep improving that whole cycle would then start all over again!

...In the end though, it's great that I'm becoming a better artist, so I'm not going to complain too much. Here are some more Havencall scenes from the article: 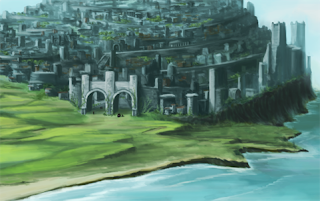 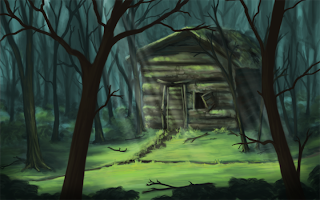 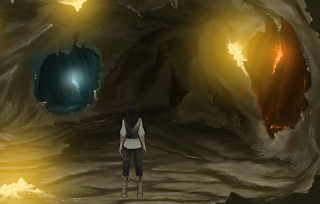 Lately, I feel like I'm developing a much better grasp on the visual direction with this game. Earlier I was mainly focused on just getting the scenes done in a way that worked in the game. Now, I'm constantly asking myself: "how can this scene be as interesting and unique as possible, while still working in the game?" You'd think I would have started off by asking that, but sometimes we don't think of the obvious when we're doing something new and a little out of our element. But at least I got there eventually. And good things are happening with this new perspective - it makes me more flexible and makes the work more fun, too!

I could probably write a lot more about what's going on in my life the past few months, but for now I'll leave it here and save other things for other posts. 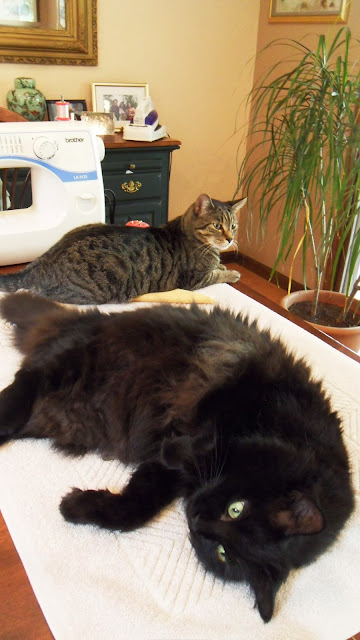 Posted by Natalie at 4:31 PM No comments: