So it may be a little late, but here's my second process journal/art walk-through! I will be going through the steps of creating a scene for Havencall, our point-and-click adventure game. As usual, the tools used are Photoshop and a Wacom tablet. Here's the scene I'll be talking about (click to enlarge):

As you can hopefully tell, this place is pretty ravaged and resource-hungry. Those mountains on the right are active volcanoes, too. It's not a very fun place to live.

Please note that many of the images in this post are scaled down significantly, since the actual game version is really huge! So you can definitely look forward to higher resolution than this in the actual game.

Also note that the sky for this scene is not final, as it will eventually be a dynamic, animated sky that can be clear or stormy. And no that's not just to look cool - it's actually part of the gameplay! ;)

Disclaimers aside, let's jump in!

But, I just wasn't feeling this. It was too flat, too boring, too impact-less (yes that's a word now). So I set this scene aside for a while and worked on other stuff. When I came back to it, I had read and been inspired by Brandon Sanderson's "The Way of Kings"(as described in my last post). I also looked for some image reference, and was inspired by this image in particular. Here's the new sketch for the landscape that I came up with:

Now I felt like I had something exciting to work with! I started by making a quick, simple color test with a huge, soft brush, working zoomed out at 25%. Here I'm just focusing on getting the right combination of colors to set the mood for the scene:

Then I switched to a hard brush (with opacity controlled by pen pressure), zoomed in a bit (to 50 or 66%) and started defining the shapes of these (fire) mountains and some of the plateaus:

Also added more colors and definition to the ice mountains at this point, on the other side of the scene:

Getting the fire mountains to a similar level of color complexity:

It's great adding cold colors to something that's meant to have an overall warm feeling, or vice versa...but it's not good to overdo it, or things can start looking messy. The full scene at this point:

Now I'm jumping into some details. Working at 100% with a small hard brush, I define the edges/cracks of the plateaus. I'm working on making the scene readable without the sketch lines, so I'm always turning the sketch on and off at this point, to see if it still makes sense with the sketch off: 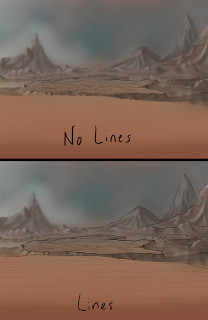 Notice that I'm a pretty lazy artist - while traditional painting would dictate that I should make these shapes read well without using lines to define edges...I'm kinda ignoring that rule...:P

More detailed plateaus, more color in the mid-ground, as well as another layer of very blue, far away mountains:

Now I did some detailing on the mid-ground and finished up shading/details on all the plateaus. At this point I felt like the background was acceptable for the time being (or maybe I was just tired of drawing mountains?), and decided to move to the foreground:

A bunch more cracks and some color variation in the foreground:

As you can see, I also went back and fixed up the mountains a bit. The ice mountains in particular needed some love!

Now, it was time to put some stuff on the foreground plateau. After a little visual research (like this and this), I sketched out a house design: 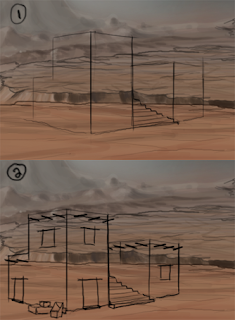 Then, I placed this sketch around the scene, to figure out what the scaling should be like. Here are a few screenshots of me fooling with the scaling as compared to the character height:

Now that I had scaling figured out, I made each of the buildings unique and fixed up the perspective a bit:

And this is another example of what a lazy artist I am: a perspective grid could have been really useful here. But instead, I'm just eyeballing it. Don't do that. Make a quick perspective grid for each house! Have vanishing points! Be disciplined. It will look better. Don't be like me! :P

After slapping down some basic color and shading on the houses, I decided there were too many, so I got rid of the one on the far right. This is also the part where I get very depressed because the houses look awful compared to the rest of the scene. But then I remember that the rest of the scene looked like that at one point, too, so I keep forging ahead...

A lot of fixing of my architecture and perspective, some cast shadows on the ground, and some detailing on the closest house. Also roughed in some shapes for trees and bushes:

Note: Plants tend to clump, not spread out evenly. They like to stick together.

Now it's getting pretty close to done! I've added some details to the plants, more house details, and a few props. Some color tweaking, and we get the final image:

And here are some close-ups so you can actually see the details a bit: 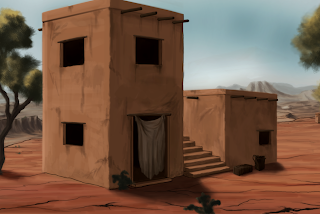 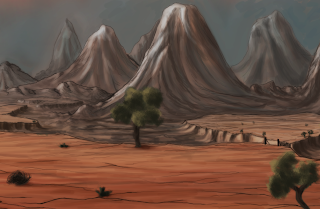 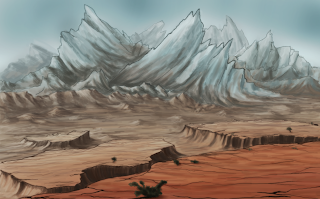 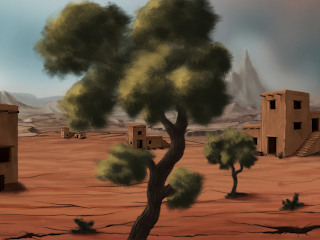 Well, that's the end! But for us this is actually just the beginning of getting this scene to come to life. For the in-game version I'll be adding a bunch of animations (door cloths flapping and treetops moving in the wind, tumbleweeds blowing across the plateau, etc.), as well as animated NPC characters Aura will be able to interact with. I'd better get back to work! :)