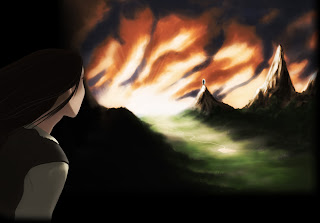 ...is one of the first drawings I made for Havencall, so I really wanted to get the atmosphere of the game right. The scene being portrayed here is within Aura's dream, so it needed to be a little surreal and magical. But this place is also more than just a dream - it is a world of mystery and wonder - a place Aura is earnestly searching for. Here are some of my notes on the process of making this piece. Tools: Photoshop + tablet.

As usual, I start with a few thumbnails to find the right layout. All I knew for certain at this point was that I wanted the landscape to be rough and jagged, and I wanted the sunrise to be a central focus. 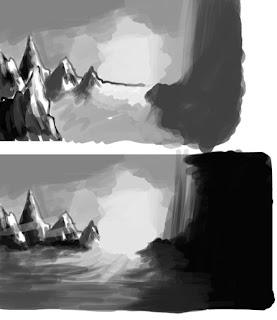 I figured leaving the valley more open, as in the second thumb, was a better idea, giving the light from the sunrise a long unbroken "aisle" to shine down, for added drama. 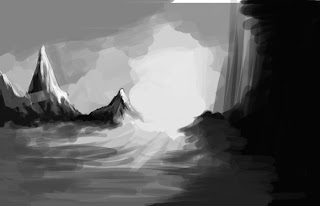 Enlarged the second thumb and added some detail to the mountains. As you can see, up until this point I'm just using a round hard brush with the opacity controlled by pen pressure. 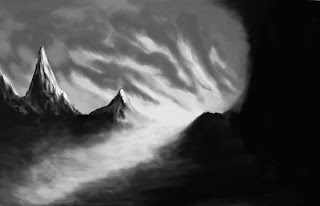 Refining the shapes and values. Now I'm using my favorite photoshop brush...which is a secret! maybe you can guess it though...:P. I also have opacity controlled by pen pressure again. I decided to have the clouds come in at this somewhat unusual angle, for drama and to convey the "otherworldliness" going on here. 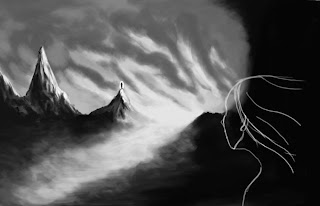 Now I've added the two figures in the picture. I actually spent quite a while here experimenting with different positions/poses for Aura (unfortunately those didn't get saved). I had her floating, full body, in a couple different poses, but neither of them seemed right. It made her feel too far away, disconnected from the viewer and felt awkward because she seemed to be part of the overall picture but really shouldn't be. In the end, all these problems were solved by placing her much closer to the viewer, as if we are looking over her shoulder. 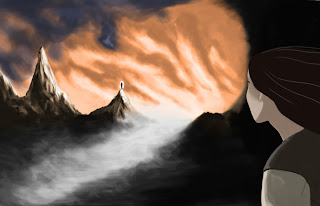 Here I've added the first bits of color using a blending mode. Again going along with the dream/surreal theme, I wanted the colors to be extremely vibrant and almost unnatural. At this point, it's a little extreme though... 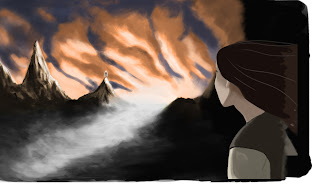 Refined the colors in the sky and the cloud formations. At this point I also enlarged my canvas a bit, and you can see some of Aura's different layers. 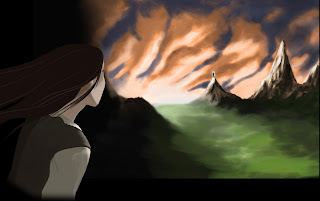 Here I flipped the canvas, because I felt that being drawn into the picture by Aura from the left would be more natural for us left-to-right readers. I also did some touch ups to Aura's hair and clothing. It's fully colored now, but that valley needs some serious work... 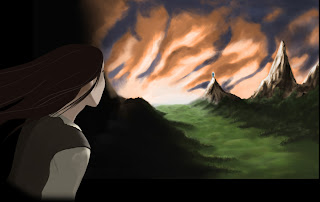 After a lot of painstaking tiny tree painting, it's nearly complete. Just a few final touches like the river, mist and sun rays left: 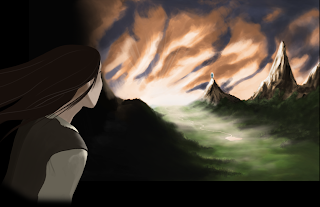 EDIT: recently, my awesome hubby showed me how to make this scene read better by adding a nifty post-processing effect of his creation:

More dramatic, right? Now on to the next hundred Havencall scenes. I'm not even exaggerating.

Welcome to my blog!

I'm an artist at Fancy Fish Games, a new independent games studio. My husband David Maletz and I have been making games for a long time, so we finally decided to get together with some of our talented friends and make an official studio. Our first game as Fancy Fish will be Havencall, which was recently announced via David's blog, The Legend of GameDev.

Anyways, This blog is where I'll post updates on my artwork and projects (hopefully pretty often), fun stuff I felt like sharing (once in a while), and perhaps a rant or two about things that make me really excited or really angry (hopefully not very often).

So stay tuned! You can also follow me on twitter: nataliedmaletz. And as a parting gift, here's a picture of one of my two cats, Dinah: 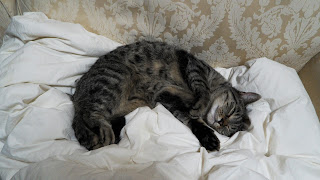 Posted by Natalie at 8:45 PM No comments: